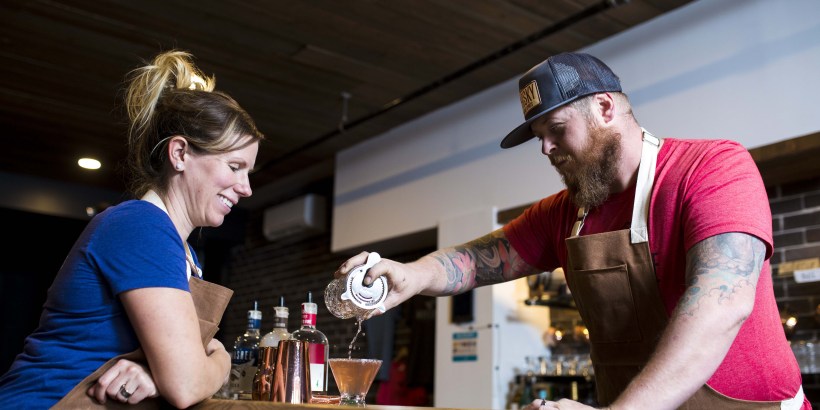 Jenn and Josh McLafferty on Making a Dream Come True

“We thought we could build the cheapest distillery in history,” laughs Jenn McLafferty as she recounts the planning phases of Monashee Distillery, the business run successfully by herself and her husband Josh. “We figured $60,000 would give us a huge buffer.”

Days after they married, Josh crashed riding motocross and shattered both legs from the knees down. He needed multiple surgeries and was left dealing with chronic pain. Unable to work in his field as an underwater welder, he was given a desk job at his company and learned the ins and outs of project management, a skill that would help him greatly with his own company.

Ready to leave the lower mainland, the two were drawn to Revelstoke and well acquainted with the area. The prospect of buying without job prospects made them wary, and they opted instead to rent temporarily in Sicamous.

“The housing crisis in Revelstoke and no job openings for me made us wary,” says Jenn, an experienced hospital nurse. ”Josh wasn’t well enough for anything like CP or the mill, so we thought we would just live in Sicamous and see what happened.”

As they settled in, word about Josh’s welding prowess got around Sicamous. Josh is proficient at uncommon welds such as copper to copper or copper to stainless steel. Before long, a local moonshiner brought in a giant still to Josh’s shop.

“He was notorious as the village drunk who makes his own moonshine,” Josh says. “When he came to pick up his still, he told me he had no money, but he had something even better.” The man produced a five gallon plastic bucket filled with animal grade feed molasses.

“I just looked at him when he said it was so I could make liquor. I kept that bucket as a reminder not to work for him again.”

The McLaffertys had a small swan neck still of their own – a pretty decoration. As the months passed in Sicamous, they found themselves looking at their still. They decided to make some spiced rum in a barrel.

“It worked,” Josh says. “It was pretty good, and we loved the process of making it.”

Josh called their distiller friends in Vancouver, the Sons of Vancouver, who gave the McLaffertys all the info they needed.

Josh and Jen knew the kind of market they wanted to pursue. “We were just finding an excuse to move here,” says Jenn. “Revelstoke is a place where having organic, local product and an outdoor lifestyle fit for us.

While having lunch at the Village Idiot, Josh saw a lease sign on the storefront they would end up buying; running their distillery on the main floor and living with their growing family upstairs.

As their research into a distillery continued, Josh and Jenn’s estimated costs snowballed from $60,000 to over $300,000.

They sold their property on the lower mainland and committed to Revelstoke. They looked into bank lines of credit before they heard about Community Futures business loans.

“One of the biggest takes from working with Community Futures for us was how much we learned,” Josh says. “We went to talk to Cindy about a loan, and we spent the next two weeks learning how to make a proper business plan; five year projections and things we wouldn’t have thought to do on our own.”

The couple went back and forth with Cindy as they made monthly breakdowns of expenditures, calculated credit card fees based on gross sales, and balanced expenses and incomes. When they were finished, they worked on a loan application.

“Community Futures broke up the overwhelming enormity of what was needed to be done so that we could really make a thorough and well thought out business plan and application. Honestly, I was expecting a huge bill for all the coaching Cindy did, but it was just part of our application,” Josh says.

“Community Futures really wanted us to succeed,” Jen explains. “Every step was about helping us achieve our goal. For example, they held off charging us our monthly payments until we opened, so we had money coming in.”

Monashee Distillery has been a hit, and the McLaffertys were able to focus on paying back their loan. Since the initial loan, they have received two more small ones – one for a broken boiler and one for an unexpected massive grain purchase. Each time, the five-year plan was updated and the loan application completed.

“I think we were determined enough to make a distillery happen one way or another,” Josh says, “but Community Futures made it so smooth. I don’t think it could have been a better transition.”

“We wouldn’t go any other route,” Jen agrees. “It felt like we were being supported by the community, which is such a great feeling. If we need a loan or business advice, it will be Community Futures every time.”